FantasyHussy wrote:Not gonna lie, I'm pretty excited about Brown in Tampa. It muddies the waters for all their receiving options, but I think he'll return WR2 value out of the gate and could elevate to WR1 status quickly. I'm downgrading every other Bucs WR, and I don't think anyone has caught on to his potential value yet.

FantasyHussy wrote:Not gonna lie, I'm pretty excited about Brown in Tampa. It muddies the waters for all their receiving options, but I think he'll return WR2 value out of the gate and could elevate to WR1 status quickly. I'm downgrading every other Bucs WR, and I don't think anyone has caught on to his potential value yet.

His playoff schedule is ridiculous. Should he make it that far. Atlanta and Detroit? Giddy up.

This^^^ is the only reason to consider him. Make no plans to use him prior, he'll be used in a high leverage manner but his reps will be limited. If the best case scenario develops throughout November then he could be a leeg winner in December. He was already roostered in deep leegs, which is just more reason why he's a firm hold. That's a long time to hold in shallow's though. And why I didn't bother.

I think you're safe

endzoneview wrote:After I typed that I looked at my week 9 and saw Sunday Night game. Oh what the hell, I'm with Griff.

Thank you for the gif!

Oh, in that case, i'm all in on for AB in his starting lineup!

endzoneview wrote:After I typed that I looked at my week 9 and saw Sunday Night game. Oh what the hell, I'm with Griff.

ANTONIO BROWN'S IMPACT IN TAMPA
Matt Waldman: In this week's Top 10, I forecast Antonio Brown's season with the Buccaneers, showing a potential path for him to be a fantasy WR1. Check out the details in the link above. For readers, here are the simple points:

Despite numerous injuries to his offense, Tom Brad is only 300 yards behind my forecast of 4,900 passing yards and 3 scores ahead of my projected passing TD total of 39. It's among the reasons he can support multiple fantasy starters, which means I think it hurts Miller and maybe to a small degree Mike Evans in the red zone.
I believe Brown's production and role will be a combination of what we've seen from Scott Miller between the 20s and what the Buccaneers desired from O.J. Howard in the red zone.
Based on my projections of Howard and Miller for the year and deducting the production they already generated, I'm forecasting Brown for an average of 7 targets, 5.8 catches, 74.5 yards, and 0.9 scores from Week 8 onward.
Brown earned 8 targets, 4 catches, 56 yards, and a touchdown in his lone game with the Patriots despite not working with Brady at all during the preseason.
With this info in mind, share your thoughts on Brown's potential moving forward by answering the following questions:
His fantasy ceiling. Give readers a specific ranking number and not just a fantasy WR1, WR2 as we typically use.
What you think is a realistic expectation for his fantasy value.
Which player(s) it could hurt.
Where do you stand on Brown's fantasy value?

Jeff Haseley: Like you, Matt, I see Brown being peppered with 7-8 targets per game and 4-6 catches. The yardage and volume could largely depend on individual corner matchups—for example, if there is a weaker matchup to exploit for Mike Evans (or Chris Godwin), I'm sure Brady will take advantage of it.

Brown's ability to gain separation and draw flags in contested catches will earn him targets. I see his ceiling for the season as a mixture of those 5-63 games and 7-118-1 games. I would say, right now, he is a flex option and possibly a WR2.

If Brady finds that Brown is the best consistent option among the Buccaneers wide receiver corps, he could bump up to a WR1, but that's yet to be determined. The safe estimate is a WR2 with 4-6 catches per game with a few big games sprinkled in.

Can he be a reliable fantasy player right now? Yes, especially in this offense loaded with talent that defenses will need to occupy.

You asked which players value may get hurt or diminish in value as a result of Brown's presence? Scotty Miller comes to mind immediately. There can only be so many receivers on the field. Miller is simply the low man on the totem pole with Brown being part of the game.

We could also see Godwin take a few snaps off as the Bucs find ways to get Brown more involved. My gut says Evans will occupy the X role while Brown will rotate the Z and the slot position. As of right now, I don't see Evan's snaps falling off that much, but Godwin could.

Mark Schofield: One of the more fascinating statements from a coach in recent memory was Bruce Arians this week reacting to the decision to sign Antonio Brown. You could add up the falsehoods in that statement and put it on par with many of the campaign commercials we're all being bombarded with these days: "I think he's matured, and I believe in second chances," Arians told reporters Sunday. "Everybody wants to say that Tom (Brady) picked him. Tom didn't have anything to do with it."

But dealing with Brown on the field. There is no doubt that Tom Brady loves him, and has lobbied for him for months now. He and Brady immediately got on the same page in just one game last season, and I would expect Brown to be an immediate contributor.

His ceiling? Definitely, a top-12 receiver, and in terms of a more precise ranking, he could be ranked somewhere around WR8-WR12 down the stretch given: A) How well Brady is playing and B) Tampa Bay's upcoming schedule.

Of course, you have to hedge a bit on realistic expectations, given that Brown has had some issues in the past. Even so, you might be looking at a solid WR2 option.

As far as who it hurts, likely Scotty Miller off the top, and maybe even the tight ends - including Gronkowski - in the red zone in terms of their opportunities. 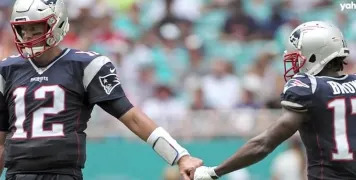