So you finally decided to try an auction.. There are two primary types of auctions, slow and live. In this article I will be covering the “slow auction.” I will be focusing on auctions hosted by MyFantasyLeague.com and the tips and explanations will be based on their system.

There are two primary differences between live auctions and slow auctions.

The first is obvious, time. During a slow auction a player stays on the block for an extended time, usually between 12-24 hours (I am a proponent of 16-18 hours). Just like slow email drafts, this gives league members the ability to draft without having to worry about matching up schedules or blocking out large chunks of time. Unless it is a home league, where you can do your auction in person (adding to the fun) or wanted the added level of stra-tegery of a 2-minute clock, the ease of scheduling a slow auction makes them a preferable format.

The second difference is the biggest one and not as obvious. Slow auctions will have multiple players up for auction at the same time. Instead of one player on the auction block their will be dozens at the same time. Below I have enclosed a screenshot of an auction underway. (I have blacked out the names of my leaguemates for their privacy.) 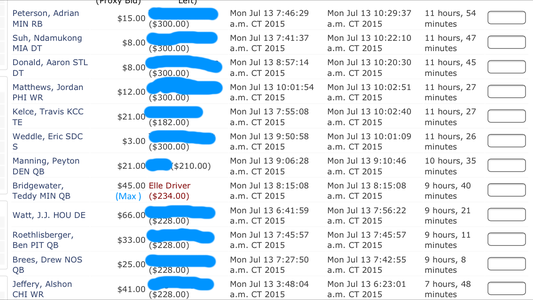 As you can see there are multiple players up simultaneously with different clocks running on them. It can be a little daunting the first time you look at it but it is pretty user friendly. Below it is the bottom of the same screen and is where you nominate players and track the draft. You will be running the auction primarily from this screen

The best example of proxy bidding is eBay. You put in your max amount and the computer automatically bids the lowest bid possible to take the lead, it will then increase your bid for you until it reaches your maximum amount. For example, I want to bid on Eric Weddle. He is currently at $3.00. Let’s say that team set their max at $5.00. If I bid $20.00 the site will automatically up the bid for Weddle to $6.00 and increase my bid to match anyone placing bids up to $20.00. For $21.00 you will take the lead on Weddle.

If you aren’t using proxy, imagine sitting at a real auction at Christie’s (even visualize the paddle…it feels wrong without the paddle). There is no automatic raise or cushion, you are going to need to bid again once your price is beat. You aren’t going to start bidding on a Van Gogh at $1.00. You can, but someone is going to follow up with $6,000,000.00 or it is going to be a really long auction. Stud players will (should) have high opening bids and the one dollar raises on them should be at the very end. Kickers should be nominated for one dollar.

Auctions will generally require the league members to put up players for nomination. A league member will put a player on the auction block and open bidding. Different leagues handle it different ways, some place a maximum on the numbers of players nominated per day whereas others will limit the amount of players to be nominated at one time. I prefer the former to the latter.

How to Nominate a Player

At the bottom of the screen (see image below) there is a drop box of players. Pick your player and submit them for nomination. Note – If your league has proxy bidding nominate them for the max amount you want to spend on them. The site will automatically start at $1.00 and it saves you from having to rebid on them. 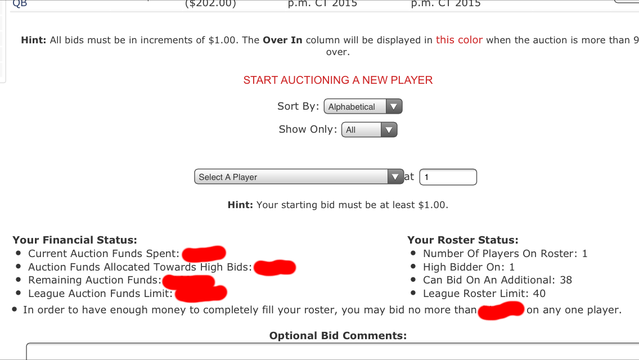 To the right of the player is a clock counting down (see image 1) until the end of the auction. Most auctions reset the clock when there is a new high bidder (see sniping).

Generally not connected to real money, this is the imaginary money you will be given to spend on players. The standard amount is $200.00 and most auction value cheat sheets use that amount but it varies auction-to-auction. The auction above is using $300.00.

As you can see in image 2, the bottom of the auction page has your auction information. Some auctions will require you to have a complete roster by the end of the auction, others do not. It is imperative that you find this out, as it greatly affects auction strategy. If you are required to have a complete roster the program will automatically add $1 for each remaining unfilled spot to calculate remaining monies. For example, if I have $100.00 left but 11 spots to fill, I can bid up to $90 on my next player.

A favorite of auction websites, sniping is the act of coming with a last minute bid to take the prize. CHECK YOUR LEAGUE SETTINGS. A majority of leagues have the auction clock reset when the high bidder changes, which means you didn’t just sneakily win a prize, you just reset the clock for another 18 hours. It will end up happening towards the end of the auction as money gets thin but intentionally doing it before then will a) really piss off your league b) possibly cause players to bid up your other players out of spite c) potentially put a player that you could have owned back in play because other teams now have additional money available.
Bidding Up and Sandbagging

It is fantasy football, and despite the fact that they are still learning, players will inevitably try and bid up someone’s player. It is a sound strategy to lower other players’ available cash but keep in mind, all bids (not the amount but the fact they were made) are shown in transactions so people can see you nipping at them. They may nip back or they may sandbag you with a player you didn’t want.

As you can see in Image 1, I am bidding on Teddy Bridgewater,  my team is Elle Driver, and there are a couple of numbers shown. You can see my current bid and underneath it is my max bid. That is the maximum you are willing to pay for a player.

Keep Your Eye on the Auction

Making a Bid on a Player

Once players are nominated it is open season on them. To make a bid on a player go to the small window all the way to the right of the player and put in the new amount you want to bid. Remember, in proxy bidding you can put your maximum in.

Once you have taken the lead on a player you are stuck with them until you are outbid, but you can lower or raise the amount of your maximum bid. For example, if I put up Dez Bryant for $35.00 with a max bid of $42 and then realize that I want to lower the max bid on him I just go to the space on the right and change the number. If you are hoping to be outbid on him or you need to free up auction cash, you can lower your max bid down to one dollar more than the current bid, $36.00 in this case.

If I see someone nipping at my player I can raise my bid. This is important if the clock resets with the change of a high bidder. If you have 2 hours left on your guy and someone is bidding him up you may want to throw in a few extra bucks to make sure you don’t get outbid.

I am available @leedoglaw on Twitter for any ‘How to’ questions. Good luck!

I suffer from an undying obsession with fantasy football. Former Lee Evans owner, I am not proud. Admitting you have a problem is the first step, I would get to the second one but I have lineups to set. Follow me on Twitter @leedoglaw
Previous Would You Rather Draft…Odell Beckham Jr. or Julio Jones?
Next Daily Dynasty Notes: Tuesday, July 21, 2015